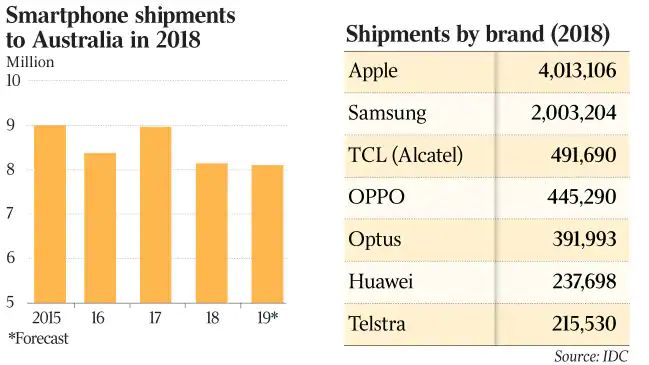 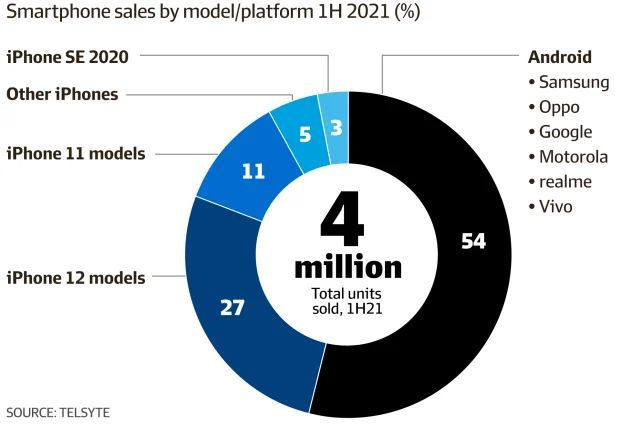 Australians’ persistent loyalty to Apple’s iPhones shows no sign of weakening, as new half-yearly phone sales data showed its local market dominance grew to 45.7 per cent of all phones sold in the first half of 2021, as the broader market grew four per cent from the previous year.

Apple has long enjoyed higher market share for its phones in Australia than elsewhere in the world, and demand for its iPhone 12 models was primarily responsible for growth in the local numbers, which research firm Telsyte said, saw four million smartphones sold in the first half of the year, compared to 3.8 million in the COVID-ravaged first half of 2020.

Telsyte’s Australian smartphone and wearable devices market study found iPhone sales were up seven per cent in the half, compared to phones running on Google’s Android operating system, which were up just one per cent.

After iPhones the next best-selling phones are all based on Android, with Samsung’s Galaxy range in second place ahead of Chinese outfit Oppo, which sells lower-priced phones, and came in ahead of Google’s own Pixel phones and devices from Motorola, realme and Vivo.

Over 1.1 million smart wrist wearables, (which includes both watches and fitness bands) were sold during the first half of 2021.