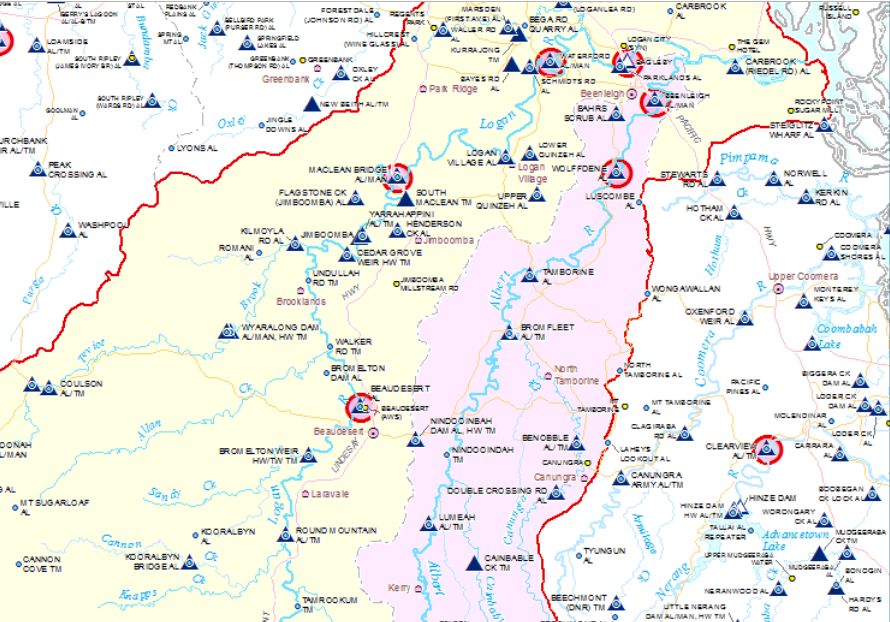 Country of Five Rivers is the name of a well-known book published 30 years ago. The rivers are 1. The Logan, 2. The Albert which joins the Logan at Beenleigh before flowing into Moreton Bay at Carbrook, 3. The Pimpama, 4. The Coomera, and finally 5. The Nerang which becomes the Broadwater on the Gold Coast before flowing into the Pacific Ocean just south of South Stradbroke Island at the . The Seaway was built in 1984-1986 to stop the longshore drift of sand that had started at Main Beach Point after South Stradbroke separated from North Stradbroke Island in 1898. As it says in that Seaway article, although nature can't be tamed, she can be guided.

Brisbane emerged as the main commercial centre in the colony. Water transport was dominant during this time, with ships carrying exports of coal and rural products, and imports of manufactured goods between Brisbane and Ipswich.

In 1826, Captain Logan had noted the importance of the Logan River, "navigable by the largest class of Colonial vessels for eighty miles and running through the finest tract of land I have seen in this or any other country". The river was the obvious first route for new settlers and boat traffic was thriving by the 1860s.

Cutters were among the first craft to operate. These were small decked boats, 8-10 metres in length, with a single mast, one main sail and one or two foresails attached to a long bowsprit. The boats were fast and were popular for the customs service in England and America. On the Logan, they were widely used for general transport throughout the entire riverboat era.

Larger cargoes were carried by punts which floated with the tide. When the tide turned, the punts tied up to the bank and waited for the next favourable tide to continue their journey, manoeuvred by long sweep oars. They could also be towed by steamers. Punts carried loads of 30 tonnes or more including firewood, cane, building materials and a variety of general cargo. The punts were virtually unmechanised, and cargo such as sugar cane was loaded by hand.

Passengers and cargo were carried by steam ships such as the Amy, Louisa, Leonie, Diamond, Tadorna Radjah and Maid of Sker. These vessels also operated at times on the Brisbane and Bremer Rivers and in Moreton Bay. In 1880, the old Settler joined the Logan fleet. Details of the Leonie give a typical picture of a boat of this era. Built in Brisbane in 1865, it was 64 feet long and 15 feet wide, clinker built on an iron frame with a single deck and a rounded stern. It had no masts, was driven by two engines developing 12hp and could carry around 33 tons of freight. Leonie had a propellor but other boats such as Maid of Sker and Settler were paddle steamers.

The steamers were relatively expensive to use. In 1879, the freight rates for the Leonie and Louisa were 8 shillings a ton, a large amount considering that the daily wage paid to a puntsman was 7 shillings. Within a year, Louisa was withdrawn, as there was not enough trade. However an advertisement in 1883 noted that Louisa had been overhauled and was to resume working with the Leonie. And, the steamer Fanny played an important role in the 1887 flood, saving the lives of many people after the hotel at Yatala was washed away.

1842 Timber cutting begins throughout the Logan and Albert Catchments. Timber-getting was the earliest industry in the Logan-Albert region. Cedar and other cabinet timbers of the rainforests of Nerang or Tambourine were cut and hauled out of the forest to the riverbank by bullock team. In the more inaccessible areas, the logs were often hauled to a gully or creek and left until flood rains could carry them out to the river.

Once at the river, the logs were formed into rafts, often by driving a spike with a loop in the end into each log and linking the spikes by a chain. The rafts were skillfully floated down the rivers on the tide, manoeuvred across the Bay where the current was basically northwards and into the Brisbane River to sawmills. There were often losses from these rafts and seeing the beaches strewn with "escapees". Ferdinand Kleinschmidt recalled an occasion in 1880 when he was asked to take his punt to Stradbroke Island to cut up three large cedar logs which had been washed up on the beach.

As a boy around the turn of the century, Alf Shailer acted as brakeman on one of his father's bullock teams. The timber was hauled to wharfs at Murray's Road where a boat named The Logan came up the creek to load. The timber was used to supply sleepers for tramways in Brisbane. Herman Lehmann of Carbrook cut timber which was later used as electric light poles in Stanley Street in Brisbane. These poles were also shipped to Brisbane by boat.

The Mayes family continued involvement in the timber industry into the 1920s and later, cutting logs which were taken to Goodna or Ipswich for milling. A considerable amount was used as pit props for Ipswich coal mines. Some logs were used as piles for building foundations in Brisbane or as bridge bearers while lesser timber was used for fence posts or firewood.

The forest was a popular source of timber for building prior to 1900. Concern for the remaining forest led the Forestry Department to instigate regular patrols of the reserve and a forest overseer was stationed on the reserve from the early 1920s. His tasks included controlling timber sales and maintaining fire breaks. An additional man was employed in 1950.