What is the relationship among Aramaic, Arabic and Hebrew?

and How do Ethiopian languages relate to ancient Aramaic (if at all)? 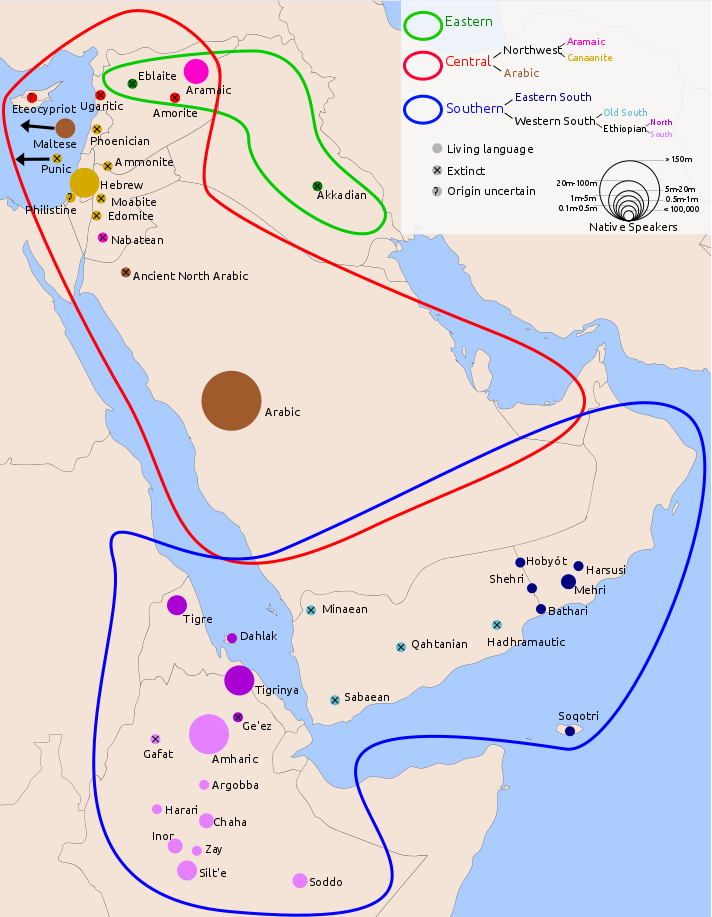 Geʿez, also called Ethiopic, is a script which severed its connection with Aramaic and Hebrew apparently long before the time of Christ. Geʿez is used for writing Amharic, Tigrinya, Tigre, and a number of other Southern Semitic languages in Ethiopia, some of which have now switched to adapted versions of the Latin alphabet.

Aramaic and Hebrew on the other hand are today referred to as Central Semitic, and are somewhat related to the now extinct Eastern Semitic language known as Akkadian (as used in the Laws of Hammurabi in Babylon).
Their 22 letter alphabet evolved into scripts for Yiddish, Ladino (Latin in Jewish Spain), Old Persian, Mongolian, Arabic and even Thai.

The following remarks are adapted from "Best answer" in answers.yahoo.com

The Semitic languages have many similarities for TWO reaons — an ancient COMMON ancestry, and much CONTACT through the millennia.

Aramaic, Arabic and Hebrew go back to one ancient "root" language we might call "Common Semitic". This is the starting place for understanding why a speaker of one language may understand, or at least easily learn, another of the languages. It's a bit like French, Italian and Spanish speakers whose languages all go back to Latin.

Much of the historical relationship amongst the different Semitic languages is obscure, and some of it is highly debated, since that 'language history' has to be reconstructed based on clues left in the languages (or in written records of earlier forms of the languages). The "family tree" model also has some significant weaknesses (see below), but is still useful for drawing a rough picture.

1) ARAMAIC — Firstly its etymology, documented in 1834 by the German scholar Gesenius. He based it on the word "Aramiyth", the language of Syria or "Aram" (in antiquity) — the lands between the Mediterranean coast and Mesopotamia (modern day Iraq). Aramaic and Hebrew, with their 22 letter alphabet, are the main representatives of what are usually called the "Northwest Semitic" languages, though in more recent systems they may also be called "North Central Semitic" languages. The two are fairly closely related, coming from two 'subbranches' of this large tree of Semitic. Aramaic actually covers a diversity of dialects.

These lands and peoples came under the control of the Assyrians ("Neo-Assyrian Empire"), then the Babylonians ("Neo-Babylonian Empire" of Nebuchadnezzar), and then the Persians. But rather than the conquered peoples adopting the language of their conquerors (especially the "Neo-Babylonian" dialect of the language that scholars call "Akkadian"), Classical Aramaic itself became the lingua franca of all those empires, and eventually many of the legal documents were written in Aramaic.

From about 160 AD, the Old and New Testaments were translated from the Hebrew and the Greek into Middle Aramaic, called the Peshitta, for the Aramaic speaking branch of the Church.

About 200 AD in Galilee, the Gemara, i.e. the Commentary section of the Jerusalem Talmud was written in Galilaean Aramaic, aka Jewish Palestinian Aramaic, for the Jewish peoples living in the region. In 500 AD, the Babylonian Talmud rewrote the Gemara in a dialect now known as Babylonian Aramaic.

2) Another Semitic language, ARABIC, swept across the region and displaced most of the Aramaic dialects after the year 800 with the rise of Islam and Arab conquest (though a few small pockets preserved Aramaic, and a handful of "Neo-Aramaic" dialects survive even to this day). In Hebrew, click here for all references in scripture, the word "Arab" derives from words that mean "dusky, evening, intermingling and intermixed and pledged, pleasant, and sweet".

But what exactly is the relationship of this Semitic language, especially to Aramaic? The "family tree" explanation has shifted a bit over the years. Arabic used to be classified with "Southern Semitic" languages (including Southern Arabian and, more distantly, the Ethiopic Semitic languages). In the past generation a new scheme has been widely accepted which suggest a closer ORIGINAL relationship of Arabic to those "Northwest Semitic" languages (including Aramaic) — and groups them together as "Central Semitic" languages. In early writings around 200AD, it used the 22 letter Aramaic alphabet, and it wasn't until the Koran was written that Arabic developed its current 28 letter alphabet.

3) HEBREW is a Canaanite language (the last remaining), and is spoken by the 'people of Israel', the Jews, who trace it back to the original language of their ancestor Abraham, recorded as the 10th generation from Shem, the 7th from Heber. .

Leading members of the Hebrew-speaking peoples of the Kingdoms of Israel and Judah were carried into exile by the Assyrians & Babylonians. When their descendants returned they brought many elements of the Aramaic language back with them, which they subsequently incorporated into the Hebrew language. Because these returnees were chiefly from the former Kingdom of Judah, they were called "Judahites" from which comes the word Jewish, "Juedisch" or "Yiddish". The Yiddish language, spoken in Germany, is about 70-75% German, 15-20% Hebrew, with its balance made up with Slavic and other influences.

Note, while commentators and some English translations regularly refer to the language spoken by Jesus and the disciples in the New Testament as "Palestinian Aramaic", in the Greek language that was used to write the New Testament, the Jews in Jerusalem spoke "Hebrais" or "Hebraisti". Click here for these New Testament verses.

The Jews back then definitely called it Hebrew, the Mishnaic Hebrew of Jerusalem. Peter's speech however doubtless included some Aramaic in his

Today in modern Israel, there are three distinct branches of Hebrew