To achieve this, ATM uses the cell concept , with fixed size packets transmitted regularly (with full or empty cells), and a cell header that identifies not only the destination but also the user's traffic characteristics (real time, throughput, transit delay, error rate, "best effort").
A comparison between ATM, PM and TDM multiplexing is shown on the next figure. 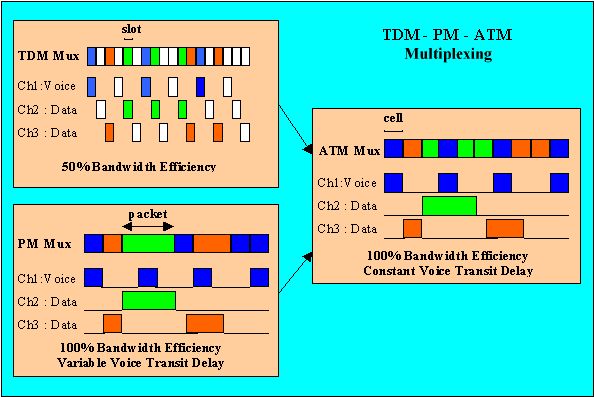 More then you ever wanted to know about DSL Filters!

Q: OK, so exactly what is a DSL Filter and why is it needed and how do they work?

Way back in the dim reaches of time, the good old Bell System (Alexander Graham Bell, The Telephone Company, Ma Bell, Western Electric, Before Divestiture, the Big Breakup, whatever....) came up with the standard for the VOICE BAND or POTS (Plain Old Telephone Service) that all telephones should handle throughout the system. It was decided that telephones would need to carry signals from about 300Hz (cycles) through to about 3,300Hz. This is the range that is needed for intelligible speech. (In truth, the phone line band is 0 to 4,000Hz, just to be safe and carry touch tones.) This is also why music, with its higher frequencies (up to 20,000Hz) sounds lousy over a phone - because you lose the high frequencies.

So when it is all put together it looks like this:

So now the big moment! The dilemma is this: Most phones or any other type of equipment that connects to the phone line (answering machine, fax, Tivo, cable box, alarm system) were only designed to deal with Voice Band signals! If you suddenly start feeding DSL signals into them you can wind up with all sorts of problems - Noise in the voice band, Shorting out of the DSL signal, Crosstalk of noise into the DSL signal, and god only knows what else!

Can you see the light come on? Bright Idea: Keep the DSL signal out of the equipment that does not know what to do with it. Install "The Filter"!

The Filter - AKA a Microfilter, POTS filter, DSL filter, Splitter, Inline filter, plastic box with wires on it... you get the idea.

Now, a filter works by filtering out the high frequency DSL signals, it does not let them pass through it, it only allows the low frequency voice signals to pass. That’s why in the electronic business this type of circuit is know as a Low Pass filter. It is a fairly simple idea, and a fairly simple circuit to implement with coils and capacitors and resistors. They are passive devices, they usually have no active electronics in them like transistors or IC's, and need no outside power. The filter, in addition to keeping the high frequency DSL signals out of equipment that does not know what to do with it, also keeps that equipment from loading down or shorting out the DSL signal itself!
That is why everything that connects to the phone line EXCEPT THE DSL MODEM needs to be filtered in one way or another.

The two ways of filtering are: Install an inline filter on each phone and other device where it plugs into the wall - or - install a big filter at the main junction (NID) where the phone line comes in and it will handle filtering everything behind it. (And you have to run a home run wire from there to your DSL modem so it has an unfiltered signal.)

Now if you have a newer type filter that has 2 jacks, one marked VOICE and one marked DSL, you could think of it as a splitter. In truth all the DSL jack is is an extra connection off the plug fed straight through from the wall, so you have an extra jack to plug your DSL modem into. Also, filters installed at the NID are referred to as splitters, as they filter out the DSL signals from the wires split off of the main phone line.