Health Minister Tony Abbott, Canberra, Oct 30, 2006
in a speech in which he referred to the Prime Minister

Despite the Government joining the Anglo-American , discouraging boat people, introducing work for the dole and cracking down on welfare fraud, religious leaders such as Cardinal (George) Pell and Archbishop (Peter) Jensen seem to have a great deal of respect for John Howard. One explanation is that he does not hector people who disagree with him or parade himself as the epitome of moral or political virtue.

To the extent that Howard has attracted a Christian vote, it’s almost certainly his character as much as his politics which has done so: his persistence and consistency, his decency and modesty, his readiness to assert a point of view without pretending that his side has a monopoly on truth. It’s precisely because Howard has never used faith as a sales pitch that people with faith often find him reassuring and trustworthy even if they don’t entirely agree with him.

contrasted now with those six years 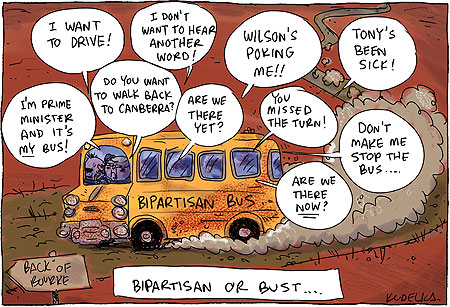