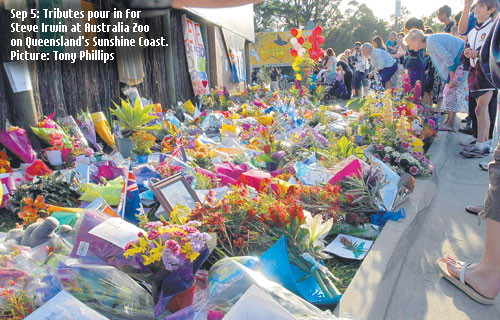 I WAS standing just down from the radio station 3RRR at the corner of Blythe and Nicholson streets in Melbourne when my phone rang. I had a photocopied magazine article in one hand, a cup of coffee in the other, and I had to juggle them to take the call.

Papers jammed in between my legs, cup perched precariously on a brick fence, I flipped open the batphone, retrieved the papers and found out that Steve Irwin was dead.

I swore loudly as the moment fused, possibly forever, into memory.

You almost certainly remember exactly what you were doing when you heard. It is even possible that Irwin's death may become our very own Kennedy moment, given that his greatest fans are all children and they will grow up carrying with them their memories of the day the crocodile hunter got skewered by a killer ray.

An odd generational marker, but undeniably our own and one that is our gift to the world as Irwin takes his place in the mass cultural afterlife next to JFK and princess Di.

Kurt Cobain was sharing a cloud with them for a while, but he seems to have wandered off somewhere.

Not everyone is mourning, however. Being on the road when it happened, I had the strange experience of watching an emotional shockwave as it travelled around the country at the speed of light, borne by text messages, phone calls, the net and the media.

Genuine shock and grief were the most obvious and powerful reactions.

In airports and in bars, on buses and trams, on talkback radio and in high-traffic blogs, people gathered, stunned, literally stunned. I watched a family in the Virgin terminal at Melbourne, the parents hugging their children, who were all brushing tears from their eyes.

Dozens of fellow travellers stood around them in numb silence. But as I said, not everyone was mourning.

Here and there, expensively dressed businessmen and women worked their PDAs and laptops without a second glance at the big plasma screens, which were all running archival footage of the big, sweating galoot having his way with a croc, or interviewing celebrities about their pain or loss. One cable news show even sought out a neuropsychologist to explain, with the help of a computer-generated image of Irwin's brain, how he'd become addicted to danger.

It was all in the dopamine, she assured us. Crikey.

Most - but not all - of the suits ignored the emotional torrents swirling around them. They were too busy to bother with a bloke who had been, well, a bit of an embarrassment when you got down to it.

Three IT guys at a conference in my hotel had even snorted in hard-boiled amusement at the headlines over breakfast on Tuesday. For them, he was just "a f--ing moron" and, worse, "a cashed-up bogan".

"What's he ever done, really?" the alpha male of that particular little wolf pack wondered aloud.

They were some of the harshest, most unfeeling words I heard until, inevitably, expat Germaine Greer pulled on her redundant fright mask and charged into print to bitchslap and rake at the dead father of two for his arrogance, his stupidity and his wanton cruelty to those poor dumb beasts ill-equipped by evolution to make a fast enough getaway when they heard the approaching thunder of Irwin's boots.

Professing her deep connection to all the dangerous thingies wrestled into submission by her erstwhile countryman, Greer championed the parrot that had once bitten him and scolded his millions of fans: "Every creature he brandished at the camera was in distress."

For the childless former Celebrity Big Brother contestant, the distress of Irwin's family was nothing when measured against the rightful vengeance of the animal world. Less a harridan than a poorly sketched caricature of a harridan, she would be easy to dismiss as some unwashed and wretched bag lady who had somehow stumbled on to the opinion pages of The Guardian, were it not for the fact this feral hag (oooh ouch - Editor) does actually speak for a significant minority.

Although, to be fair, she probably wouldn't like to think of herself as having anything to do with those three guys at the breakfast buffet, as they were grown men rather than hairless boys, and thus deserving only of her contempt rather than any creepy sexual consideration.

In one poisonous discharge of bile, Greer has condensed the ill feelings of a whole class of Australian sophisticates who found Irwin's cartoon imagery uncomfortable and even humiliating, given his global exposure. Why, oh why, when we are now so very grown up and important, did the world have to fall for this ocker buffoon's man-child routine? And to think of what Barrie Kosky could have done with an hour a day on Animal Planet! Oh the humanity.

Irwin was very much aware of the mixed feelings the inner urban elite had for him, but if it hurt his feelings, he never let it show.

He is well known for enormous sums of money he spent on conservation, but he was also a heavy donator to cultural institutions such as the Queensland Museum.

In the end he knew that he was doing more for the planet than any number of self-styled green activists or sympathisers. Yes, he was a showman, but when he had your attention by slamming a headlock on some recalcitrant man-eater, he wouldn't let you go until you understood just how close to annihilation was so much of the world's wildlife.

Greer and her ilk took umbrage at the fact that Irwin was a fan of John Howard and had even been invited to the Lodge to meet George W. Bush, on the insistence of the US President.

But a few words from the Crocodile Hunter to the most powerful man in the world could have done more to change the Bush administration's environmental policy than any number of rants by a barking maddie such as Greer.

We should have sent Irwin to the Crawford ranch instead of Howard. He could have crash-tackled Dubya to the ground and held him there.

"So you gonna ratify Kyoto or what, mate? Orright! You little beauty!"

We are all much poorer for his passing.

John Birmingham is a Brisbane-based novelist and writer. 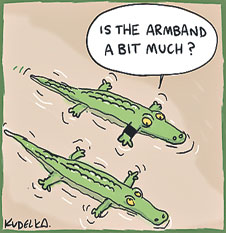