Tony was talking about Haran, I immediately thought of the word "Delay", that was in fact the meaning of Abraham's dad's name in Hebrew, Terah, when Abraham waited, for maybe 5 years (or so), waiting for his father's funeral.

Here's a page someone's popped together, looking at this, and some of the meanings. Some great teaching there. We don't often like to think of Abraham as a human chap

, pages like this one help to open him up. Just one tiny correction, Sarah is referred to as his half-sister, but according to the Jewish Talmud she was his half-niece, the word for daughter/ grand-daughter of Terah, sister/ niece of Abraham can be the same in ancient Hebrew, and Sarah was Iscah, a word that means prophetess, the daughter of Abraham's brother Haran in .

Haran, the word, actually comes from Har, click there for the references, means "mountain", a high parched place, no life.

Haran, click there for the Wikipedia link, in later Roman times was known as Carrhae, and it had another meaning "crossroads", as it was on the route between Nineveh and Carchemish in ancient Assyria, those old cities built thousands of years ago, shortly after the flood, when our population was a lot smaller

Today it can be found just 44 kms south-east of Sanliurfa, ancient Edessa, in modern-day Turkey.

Here's a short article below 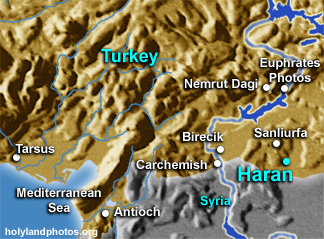 Haran (also Harran) is located 28 mi. [45 km.] south-southeast of Sanliurfa in an open plain area. The name, meaning "cross roads." It was located on the route that led from Nineveh in the east to the ford on the Euphrates River at Carchemish 55 mi. [90 km.] to the west.

It is mentioned 11 times in the Old Testament. Abram settled here for a period of time on his way from Ur to the Land of Canaan (Genesis 11 and 12). Isaac's wife Rebecca was from the area. Jacob lived here with Laban for 20 years after fleeing from his brother Esau (Genesis 29). Here he married Leah and Rachel, and all of his children, except Benjamin, were born here! The city is mentioned in cuneiform texts as far back as 2000 B.C. It was a center of the worship of the moon god Sin - who was also worshiped at Ur. It appears frequently in cuneiform documents and was the last capital of the Assyrian Empire until being captured in 609 B.C. by the Babylonians. In 53 B.C. Crassus, a prominent Roman, was killed here and his troops annihilated. In A.D. 217 the Roman emperor Caracalla was murder here.

Today about 7000 people live in the village and vicinity.