In   Ancient Rome,   Ancient Greece,   Ancient Israel,   Ancient Egypt, record keepers used a range of alpha (or some other character) to specify individual numbers. And for measuring purposes, the abacus, with its use of smooth stones in a base-10 counting frame was widely used at the time of Christ. It's use is in fact inferred in the Lord's question: "Which of you intending to build a castle does not first sit down and count (via these pebbles) the expense for whether you've got what it's going to take to complete it?" See

In Ancient Babylon, a positional column setting using a base-60 set of numbers were used. The right column covered numbers 1-59, next column to the left covered (1-59)*60, and so on. If a fraction was necessary, a further column would be set up on the right. A zero value was indicated by leaving a space in that column. Division was done by multiplication, using the number's reciprocal (as set out in tables).

This base-60 system was useful for measurements of time (minutes and seconds), and also space (the 60 degree angle used in 6 equilateral triangles set out in a hexagon could establish perimeters and areas for any point on the compass). See the image below for these Babylonian numerals. 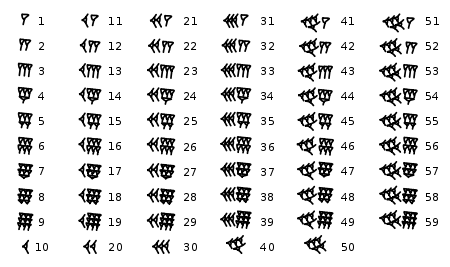 Click here en.wikipedia.org/wiki/Counting_rods regarding the base-10 set of counting rods as were used in China.

Finally, click here for the base-10 set of Arabic numerals. These "Hindu" numerals as Persian polymath al-Khwarizmi (Al'gorithmi) called them with his publishing of a book on algebra (al-jabr), back around 820 AD, then spread through the Perso Arabic world.

Decimal fractions were seen about 952 AD, with scholars using a bar over the units digit, e.g. 9995. Commonly seen today as an underbar to superscript digits when printing monetary values e.g. 9995. Later, a "separatrix" (a short, roughly vertical ink stroke) between the units and tenths position became the norm among Arab mathematicians (e.g. 99ˌ95), while an L-shaped or vertical bar (|) served as the separatrix in England.
These "Arabic" numerals were adapted by scholars in the West after 1202, importantly Leonardo Pisano (Fibonacci), followed by Sacrobosco at the University of Paris — and after 1494 came into regular use worldwide.

Now, why that long delay ? In fact in Florence (top trading centre in the west in 1299) bookkeepers were forbidden the use of these new Arabic numerals.

And so the west had to wait for the invention of the printing press in Germany around 1440, the publishing of the "" Summa de Arithmetica in 1494, also seeing their useful application when printing verse numbers in the Bible during the 1500s, before Arabic numerals achieved widespread acceptance.
Finally, something they could agree on. α

before the printing press, the period character was used in Roman numerals to separate thousands from hundreds, and hundreds from units, in France and on the continent. But in England Scotsman John Napier printed a book on logarithms in 1614, using the period character to separate whole numbers from decimals, apparently the first major writer to do so. And in 1711, we see it in English as the "Decimal Point". On the continent, somewhat confusingly, they continued to print the traditional comma there Today, every country has its own standards, click here for a recent list, by country.

βOne exception to writing whole words instead of letters for numbers in the Greek New Testament is that famous passage in "he makes everyone be given a mark in their right hand or on their forehead and that no one have the power to buy or sell, except the one having the mark, or the name of the (wild) beast, or the number of his name. Here is wisdom. Let him that has understanding count the number of the (wild) beast, for it is the number of a man and his number 666". The earliest manuscripts used Greek letters as numerals: χ ξ ϛ pronounced khee, ksee, stigma, three marks or "x" sounds, and as we say it in English: six hundred sixty six. Declared to be the Emperor Nero in many, early writings.

Measurements - Geometry and Astronomy - size of the earth

Extract from Josephus chapter 3 paragraph 9: "But let no one upon comparing the lives of the ancients (Adam to Noah) with our lives, and with the few years which we now live, think that what we have said of them is false; or make the shortness of our lives at present an argument that neither did they attain to so long a duration of life. For those ancients were beloved of God, and lately made by God himself; and because their food was then fitter for the prolongation of life, (they) might well live so great a number of years. And besides, God afforded them a longer time of life on account of their virtue (manliness), and the good use they made of it in astronomical and geometrical discoveries".

Click here for info on the "golden ratio" geometry involved in the Great Pyramid of Giza, built by the children of Seth prior to the flood - see chapter 2 paragraph 3.

Josephus also attributes to Abraham the office of being a maths teacher, an astronomer and a diplomat (as well as being that of a shepherd), wisdom he had gained in the Chaldees where he was born. He passes on this mathematics knowledge to the Egyptians, for yes, it had been 430 years since the flood - see timeline, and this knowledge had been lost in Egypt (as well as in Greece). It is now the Middle Kingdom, and pyramid building restarts.

Extract from Josephus chapter 8 paragraph 2: "For whereas the Egyptians were formerly addicted to different customs, and despised one another's sacred and accustomed rites, and were very angry one with another on that account, Abram conferred with each of them, and, confuting the reasonings they made use of, every one for their own practices, demonstrated that such reasonings were vain and void of truth: whereupon he was admired by them in those conferences as a very wise man, and one of great sagacity, when he discoursed on any subject he undertook; and this not only in understanding it, but in persuading other men also to assent to him. He communicated to them arithmetic, and delivered to them the science of astronomy; for before Abram came into Egypt they were unacquainted with those parts of learning; for that science came from the Chaldeans into Egypt, and from thence to the Greeks also".

Long before Copernicus (1473-1543) Galileo (1564-1642) and Newton (1642-1727) it was known to most scholars that the earth was a sphere.
See and this quote from Aristotle "it is the sea which divides as it seems the parts beyond India (The Eastern or Pacific Ocean) from those beyond the Pillars of Hercules (The Rock of Gibraltar i.e. The Atlantic Ocean) and prevents the earth from being inhabited all round". Yes, he said it was round.

However the Heliocentric concept of it being a "revolving earth" that travelled around the sun found considerable difficulty countering the mainstream Geocentric concept of it being a "stationary earth" which the sun travelled around instead. This was the teaching developed by the aforementioned Aristotle (384BC-322BC), and also Ptolemy (100AD-170AD). Gradually after Copernicus the heliocentric idea of the earth being a part of the Solar System was accepted as a more scientific explanation, and it has been proved by the space flights of the past century.

Eratosthenes — click to view further details — a Greek astronomer who lived in Alexandria in 230BC and demonstrated the circumference of the Earth without leaving Egypt.

Eratosthenes knew that on the summer solstice at local noon in the Ancient Egyptian city of Swenet (known in Greek as Syene, and in the modern day as Aswan) on the Tropic of Cancer, the sun would appear at the zenith, directly overhead (he had been told that the shadow of someone looking down a deep well would block the reflection of the Sun at noon). He also knew, from measurement, that in his hometown of Alexandria, the angle of elevation of the sun was 1/50th of a south of the zenith on the solstice noon.

Assuming that the Earth was spherical (360°), and that Alexandria was due north of Aswan, he concluded that the meridian arc distance from Alexandria to Aswan must therefore be and was therefore 1/50 of the total circumference of the Earth. His knowledge of the size of Egypt after many generations of surveying trips for the Pharaonic bookkeepers gave a distance between the cities of 5000 stadia (about 500 geographical miles or 800 km). Multiplying this figure by 50 gives 25,000 miles or 40,000 km.

From this he may have thus demonstrated that the distance to the sun from the earth was about 150 million kilometres.

There were later disagreements about his calculations regarding the circumference of the earth, and Christopher Columbus took the lower estimate as seen on the map he used, of course he may never have got financial approval for his trip if he’d gone with the higher estimate.

Following John Napier's logarithms in 1614, the slide ruler was built. Used by engineers everywhere before PCs and calculators.

In the past century it has been estimated that there are 1080 atoms in the universe with perhaps 100 billion galaxies, 1067 atoms in our Milky Way Galaxy with its 200 billion or so stars, 1056 atoms in our Solar System (99.8% inside the sun), 1050 atoms upon the earth, and about 1027 atoms in an average 70kg adult human being, (of which 45-65% is pure water, H2O). There are about 30 trillion additional cells in this adult, that includes about 25 trillion red blood cells. Each cell in this adult averages about 1014 atoms, varying between 1017 atoms e.g. in an ovum, and 1012 atoms e.g. in a sperm cell. There are about 1011 atoms in each cell's DNA (inside the nucleus). Each red blood cell (having extruded the nucleus) is capable of carrying more than one billion oxygen molecules O2. The oxygen atom makes up the bulk of our mass.

Unfriendly viruses are much smaller, about 108 atoms, such as the HIV virus with its 64 million atoms that sneaks inside white blood cells – people's immune systems. Or coronavirus (such as COVID-19) with maybe about 200 million atoms that attack the cells inside the lungs.

Antibodies from plasma cells in bone marrow that fight infection are very small ~20,000 atoms.
We are fearfully and wonderfully made. May God grant us his .

Two other issues, dark matter, a word invented in the 1930s, because gravitational pull could not explain all the motions occurring with the galaxies and the clusters of ,

and dark energy, a word invented to refer to the expansion occurring with the solar system, the galaxies, and the universe, (as a result of God's second day) without mentioning the word "God".

And yet he (Father, Son, and Holy Spirit) is so near to us.