The Australian
Steve Lewis, Washington
May 16, 2006


IS there nothing George W. Bush won't do for John Howard? Not only has the US President laid on an official state visit, complete with a black-tie soiree at the White House, he was even prepared to miss the final episode of the TV series The West Wing to dine with his Aussie mate.

A Sunday night roast at the Australian ambassador's residence, to be precise.

There, Bush and Howard - along with their wives and some offspring - joined ambassador Dennis Richardson for an intimate meal.

Perhaps Bush, facing lame-duck status and with his approval rating plummeting, wanted advice from the Man of Steel on how to keep the punters happy. Or maybe the President wanted to cross-check a few lines with the PM before his address to the nation on the US immigration laws, to be broadcast today.

Anyway, it was an excuse for the wives to celebrate Mother's Day with their families - including young Richard Howard, who is ensconced in a Republican-leaning lobby firm in Washington. It was a long way from the NSW mining town of Broken Hill, where Treasurer Peter Costello was touring to sell the budget amid feverish speculation about the prospect of a leadership handover late in the year.

"The only departure I am thinking of now is my departure for the airport," Costello said.

As a symbol of how close the Howard-Bush relationship has become, a tree-planting ceremony in the ambassador's residence spoke volumes.

The national leaders, relaxed and comfortable with each other, hammed it up for the 150-odd guests and the media. First, Laura and Janette, in nearly matching pantsuits, turned a few sods for a magnolia. Then Messrs Bush and Howard walked across the embassy's lawns to plant an American elm. For Bush, the planting of the two trees was a "symbol of our enduring friendship".

There was symbolism for Howard, too. The PM had used the same piece of lawn the day after the 9/11 attacks to announce Australia's support for its big ally in the war against terror.

Then it was off to dinner. The West Wing would just have to wait. 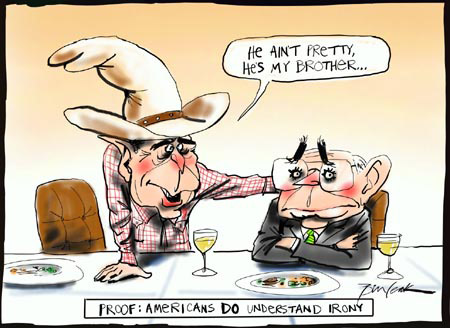